LYREBIRD TRIO
The Lyrebird Trio is comprised of Australian musicians Glenn Christensen (violin), Simon Cobcroft (cello) and Angela Turner (piano), all distinguished graduates of the Queensland Conservatorium. Formed in early 2013, the trio takes their name after the remarkable Australian native lyrebird, also an important emblem of their alma mater for much of its history.
In July 2013, Lyrebird Trio won all piano trio prizes at the quadrennial Asia Pacific Chamber Music Competition: the Beluera Prize for best piano trio, and the Peter Druce Audience Prize. Subsequently, they featured in the ABC International documentary “Ivory, Strings and Bows”, broadcast in over 40 countries across Asia, North America, the Pacific and Indian subcontinent. As Winter Musicians-in-Residence at the Banff Centre for the Arts, Canada, they gave numerous performances across the region in January/February 2014. The trio made a welcome return to Banff in January/February 2015, recording their debut CD for the Master Performers label, hailed by The Australian as “exquisite and exhilarating” and “an impressive recording that augurs well for a long and enriching life by three stellar young Australian musicians.”
During 2014-2016, Lyrebird Trio were Ensemble-In-Residence at the Queensland Conservatorium, and since 2018 are Ensemble-In-Residence at the Mackay Chamber Music Festival. In addition to their core season, other recent appearances have included engagements at the Melbourne Recital Centre, Sydney Opera House, the Port Fairy Spring Music Festival (Victoria), Tyalgum Festival (NSW), Ukaria Cultural Centre (South Australia), Musica Viva QLD, 4MBS Festival of Classics, Beethoven’s Triple Concerto with The Metropolitan Orchestra (Sydney), and recordings and broadcasts for ABC-Classic FM, and the MBS networks.
Outside of the trio, Glenn Christensen is a member of the Australian Chamber Orchestra; Simon Cobcroft is Principal Cello with the Adelaide Symphony Orchestra, and Angela Turner is a specialist lecturer at the Queensland Conservatorium, Griffith University.

Angela Turner has performed as piano soloist and chamber musician throughout Australia, England, Canada and Taiwan. 2017 marks her 12th year of lecturing at the Queensland Conservatorium, and 19th as specialist piano lecturer at Young Conservatorium. A Conservatorium Medallist (2000), Angela completed a Master of Music on exchange at the Royal College of Music, London. She has been the recipient of numerous prestigious national awards, in the capacities of chamber musician, associate artist and soloist.

Lyrebird Trio gives a recital as part of the Queensland Conservatorium Concert Series on April 27 - our only full appearance in Brisbane this year!  We're happy to return to Flutterbies at Tyalgum, Northern NSW (presented by Hearts Aflame Productions) on April 29 to give a special concert, including Paul Kopetz's trio dedicated to Betty McKenzie, a long-time supporter of regional arts and of the Tyalgum Music Festival.

The visionary Ukaria Cultural Centre welcomes the trio's return on July 8, at the Mt Barker summit in the Adelaide Hills. Details about their fantastic 2018 Concert Series can be found at https://www.ukaria.com.

Our violinist, Glenn Christensen, is the Artistic Director of the new Mackay Chamber Music Festival.  We're very excited to be giving multiple concerts, masterclasses and talks over the weekend of 20-22 July; please visit http://www.mackaycmf.com.au for more information about the festival and the other wonderful artists taking part, as well as ticket packages.

2017 will be a quieter first half of the year for the trio, with violinist Glenn Christensen based overseas for much of the year.  Glenn returns to Australia and the trio comes together for multiple performances in September. We're thrilled to be invited for numerous performances at the Tyalgum Festival in northern-NSW, September 8-10th. You can catch Angela and Glenn playing some Beethoven on the 8th (as well as Angela performing with cellist Louise King and oboist Eve Newsome), and the trio in recital on Saturday 9th. Saturday night sees Simon perform as soloist with Camerata - QLD's chamber orchestra.

On the 19th September, we give a special concert in Murwillumbah in memoriam of Betty McKenzie, a long-time supporter of regional arts and of the Tyalgum Music Festival in particular. We gave the world premiere of Paul Kopetz's piano trio, dedicated to Betty, last year at the Tyalgum Festival.  On the 20th of September, we return to the QLD Conservatorium - this will be our only Brisbane performance this year!

Our debut CD, featuring trios by Nigel Westlake, Beethoven and Smetana, has just been released by the Master Performers label in January 2016. CDs can be purchased on this website, and digital downloads are available via iTunes, Amazon, CD Baby, and other streaming services like Spotify. Thanks to Paul Carasco from Master Performers, and our photographer Renee Hubbard from Renee Hubbard Fine Art Photography for her image work. We're thrilled to announce that our recording producer Anastasia Rybakova was a finalist in the international Audio Engineering Society's (AES) prestigious student recording awards in New York, USA (October 2015) for our recording, representing the Banff Centre, Canada. Congratulations Anastasia!  You can listen to excerpts from this CD below.  We hope you enjoy the album!

Our CD received 4.5 stars in "The Australian" Weekend Review, February 28-29 edition! "The three works in their debut recording illustrate the richness of their collective and individual talents.  Opening with Beethoven’s so-called ‘Ghost’ Trio, Op 70 No 1 plays to their fresh approach to the classical repertoire, clean and devoid of hypersensitivity... rewarding is Smetana’s rarely recorded Trio in G minor, Op 15. At 30 minutes, it is virtually a piano concerto with string accompaniment and Turner captures its torrents of storms and exhausting mood-swings as graphically as her painter namesake. The performances are exquisite and exhilarating, captured in a grateful acoustic, the booklet notes are exemplary. An impressive recording that augurs well for a long and enriching life by three stellar young Australian musicians."

Lyrebird Trio has been re-appointed as an Ensemble-in-Residence at the Queensland Conservatorium for 2016. During the year, we'll be presenting trios by Beethoven, Westlake, Mendelssohn, Schumann, and the world premiere of "Kakadu Tango" by Vincent Plush.  We're also really looking forward to be presenting a collaborative concert with fellow in-residence ensemble, Lunaire Collective.

The Lyrebirds make their debut for the Ngeringa Arts (Adelaide) in 2016. Their recital on Sunday February 28, 3pm, will open the 2016 Ngeringa Arts Concert Series. For more information on this amazing series and venue, and for tickets, please visit http://www.ngeringaarts.com.au/.

The trio will be appearing at the 2016 Tyalgum Festival, 9-11 September. Looking forward to performing in the beautiful surrounds of this northern-NSW town!

Other concert engagements for 2016 will be announced shortly!

Lyrebird Trio continues in the role of Ensemble-in-Residence at the Queensland Conservatorium in 2015. Concerts will include the great Schubert B flat major trio, Smetana, Mozart and more! Concert dates are June 5 and August 27.

Please note that the October concert date noted in the 2015 Queensland Conservatorium Concert Calendar was a misprint.  (We were surprised to see it there ourselves!) 2016 concert dates will be announced in November.

The trio returned to Canada in January/February 2015 as Winter Musicians-in-Residence at the Banff Centre.  They recorded a long-awaited CD during their residency, including trios by Nigel Westlake, Beethoven and Smetana.

Violinist Glenn Christensen has been appointed as a member of the Australian Chamber Orchestra, and cellist Simon Cobcroft as Principal Cello of the Adelaide Symphony Orchestra. Pianist Angela Turner remains on staff at the Queensland Conservatorium.  Despite living in three different states, we're committed as ever and flying around for rehearsals.  The frequent flyer points are building...

In August 2014, the trio have been engaged to perform the Beethoven Triple Concerto in Sydney with the Met Orchestra, with conductor Sarah-Grace Williams.  The concert will take place at the ABC's Ultimo Centre, in the Eugene Goossens Hall. For tickets, please visit the Met Orchestra's website.

The Tweed Gallery/the new Margaret Olley Art Centre in Murwillumbah, Northern NSW, is hosting the Lyrebird Trio on April 6, 2014, in a recital of Haydn, Schumann and Beethoven. Ticket information can be found here.

2014 promises to be a very busy year. The Lyrebirds are excited to be flying to Canada in January 2014 for a residency at the Banff Centre for the Arts. Upon their return to Brisbane in February 2014, they will take on the role of Ensemble-in-Residence at the Queensland Conservatorium, Griffith University.  Concert dates are April 4 and May 9, with more information available below and at http://www.conevents.com.au/.  The May 9 concert is part of the 4MBS Festival of Classics.

A TV documentary about the 2013 Asia Pacific Chamber Music Competition, in which we took part in July, has been released and is available to view here.  Nice to see a few snippets of us playing works by Nigel Westlake and Shostakovich, and a behind-the-scenes view of the competition and the other terrific musicians involved.  It was produced by ABC International and was first aired across the Asia Pacific via the Australia Network in December 2013.

In October, the Lyrebird Trio were delighted to take part in the 2013 Port Fairy Spring Music Festival, Victoria, performing Haydn and Smetana for an appreciative capacity audience.  Many thanks to Chamber Music Australia for their support.

In August 2013, the Lyrebird Trio were invited to play at the Australian Youth Orchestra's gala dinner, held at the Sydney Opera House, in performances alongside American violinist Joshua Bell and didgeridoo master William Barton.  All three members of the Lyrebird Trio are alumni of AYO's various programs. 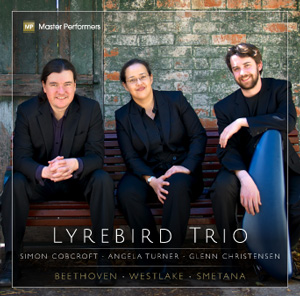 ''The performances are exquisite and exhilarating, captured in a grateful acoustic, the booklet notes are exemplary. An impressive recording that augurs well for a long and enriching life by three stellar young Australian musicians.'' 4.5 stars - Vincent Plush, The Australian, Weekend Review, February 2016

Want to get in touch?